You describe this home as ‘cool, calm and collected’, yet your clients had two separate aesthetics (Hamptons vs modern industrial); did you find this difficult to combine?

It was definitely a mixing pot of ideas in the initial stages of the design, however our clients said they felt they both got their own way in the end – with a space that was uniquely them.

We entered into the design process knowing that in certain areas one style would take the lead over the other. We agreed the colour palette would provide the consistency and common thread throughout the apartment even though the materials and styles would switch up.

New Farm is a gorgeous area, how did you draw from the apartment’s surroundings?

The outlook of the apartment is directly into the canopy of trees in The Arbour, which is pretty unique for a busy area like New Farm. It has an uninterrupted expanse of green from any of the eastern facing windows and great city views from the Western side. These surroundings were also the basis of the mixture between the natural Hamptons and modern industrial design fusion.

What shape was the apartment in before the renovation?

The bones of the apartment were good, it was a great sized three-bedroom two-bathroom apartment with fabulous views, however it hadn’t been touched since it was built.

The main problem was it lacked character and didn’t connect to the outside. See the before photos below.

“The bones of the apartment were good…however it hadn’t been touched since it was built.“

Let’s talk key pieces! The couch in the main living room looks like an incredible custom piece – can you talk about the process of creating this traditional toile couch?

All the materials, fabrics and furniture were chosen with a clear purpose to unify the two styles. The modern modular Jardan sofa was paired with a classic Toile fabric. By using this fabric it created a softness & warmth whilst referencing a more traditional/Hamptons style. Furthermore, by using three of the colourways in the design it added an additional layer of personalisation and mixing of the two styles.

“All the materials, fabrics and furniture were chosen with a clear purpose to unify the two styles.” 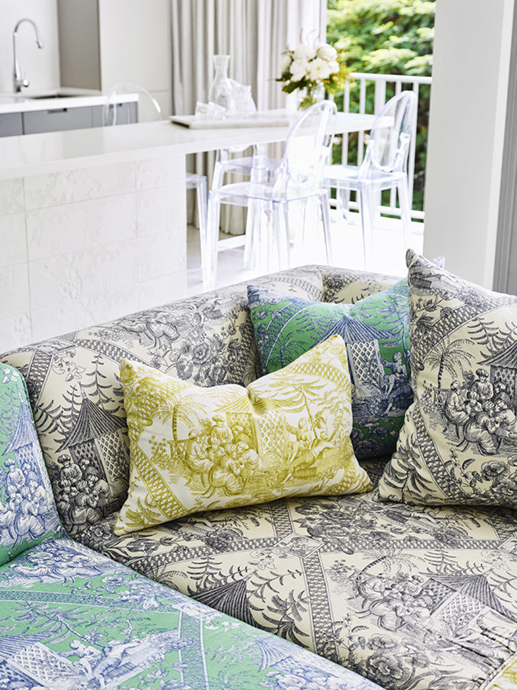 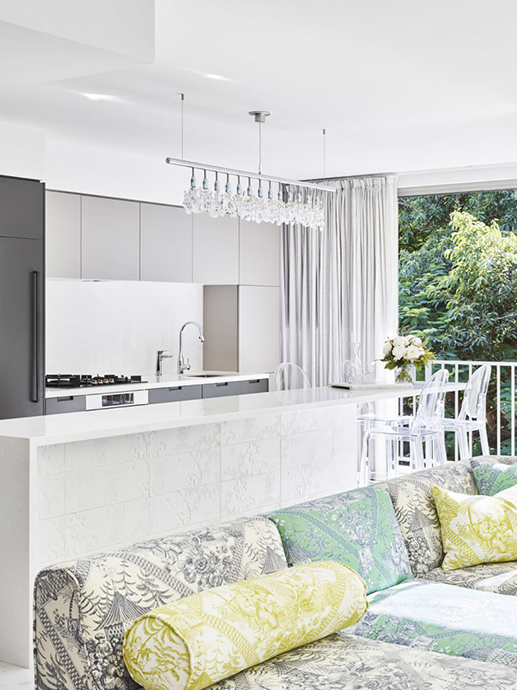 The living room also combines a sisal rug, Perspex side tables and formed concrete cabinetry to bring the essence of the two design styles together.

Can you talk us through the reconfiguration of the dining area?

This was the biggest structural change to the apartment, as the staircase was previously floating. To utilise the space efficiently, we enclosed it and created a built-in seating booth which added architectural interested and saved space – win, win! We covered the bench seat cushions in a more traditional ticking stripe fabric and integrated a chunky timber table and modern chairs to fuse the styles again. 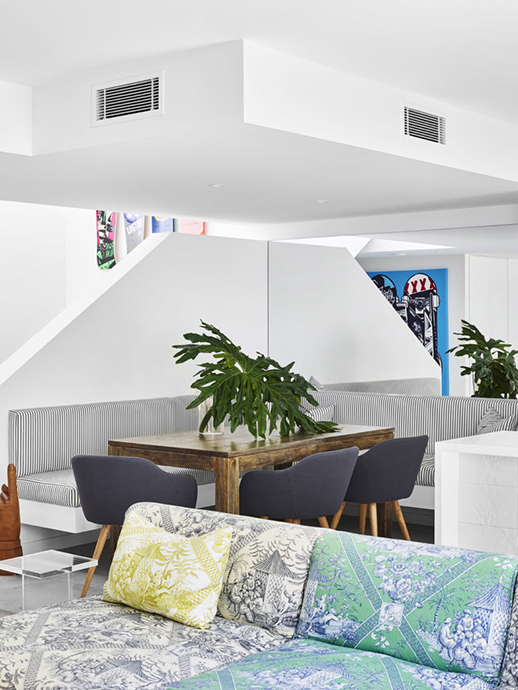 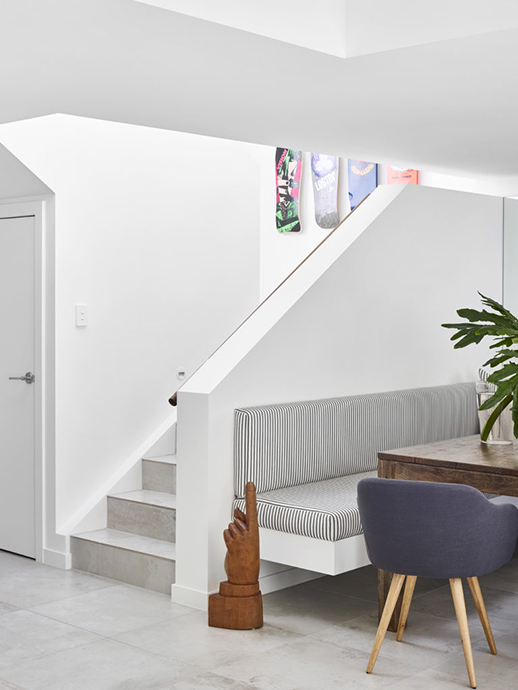 Keeping the fusion of styles in mind we opted for a strong cabinetry design featuring prominent lines & stainless-steel appliances. We then bought in the more traditional finishes with crystal pendant light and linen curtain to soften the space. Due to space restrictions, we were unable to have a traditional seating overhang on the island so we opted for a textured tile to create depth & interest.

A bar table was also added at the end of the bench creating an additional casual dining area and connecting with the greenery outside. The client said the adjustment of the layout when extending the bench and creating a great dining booth has really made a massive difference to the usability of the home.

“A bar table was also added at the end of the bench creating an additional casual dining area and connecting with the greenery outside.” 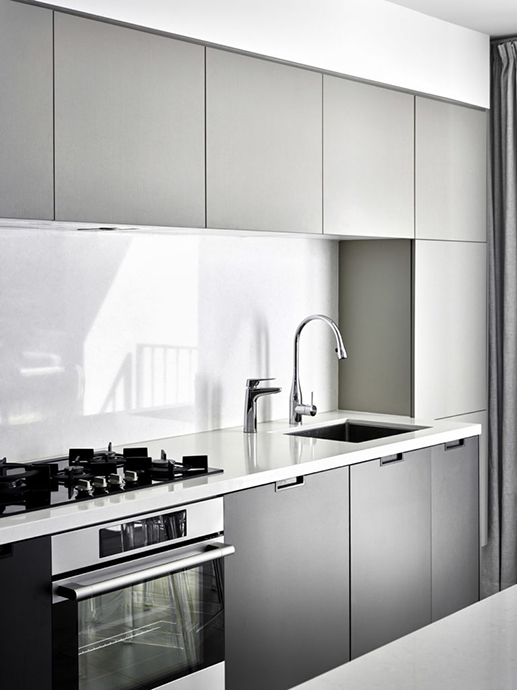 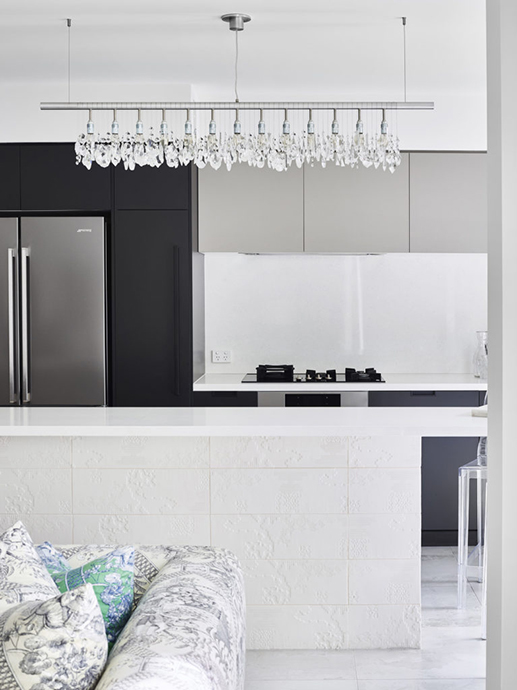 There are some great abstract art pieces, including a skateboard wall, in the home – how did this idea come about?

The owners have been picking up skateboards from various places they’ve lived and travelled over the years and it was a just a matter of where and how we could display them. The stairwell was the perfect fit in terms of height and width. It also took a blank wall and created a real feature. At night time the light catches behind the boards and they glow! 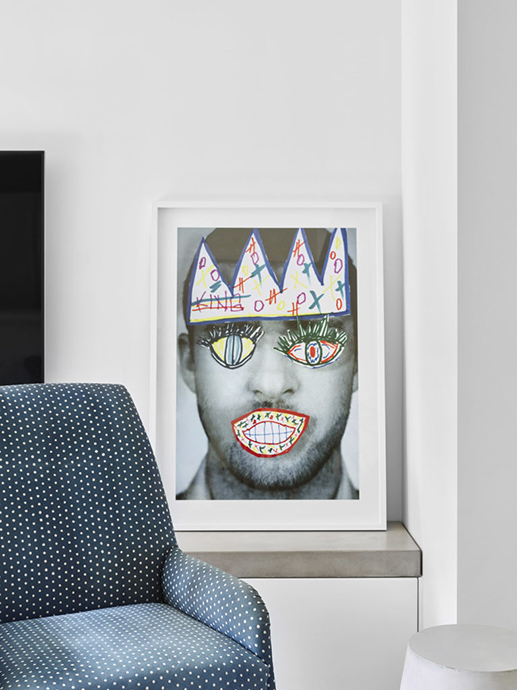 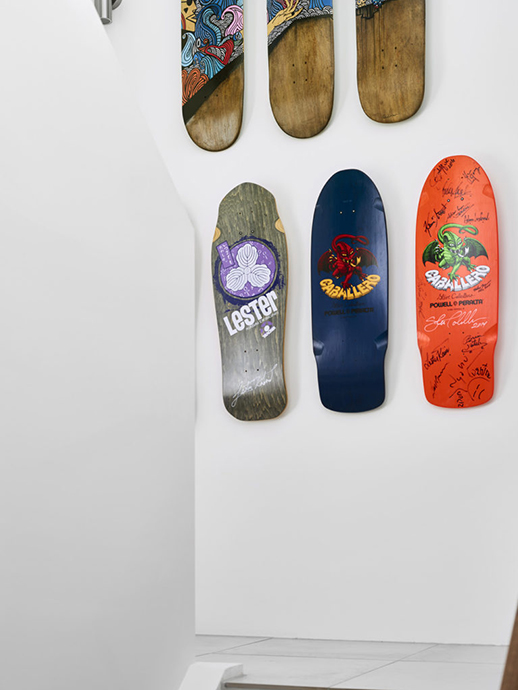 The majority of the house has a calm vibe, but there are punchy moments like the bedroom headboards and striped wallpaper. Can you chat about the thought process there?

Both of these rooms lean more to the industrial edgy aesthetic. The rooms are quite large and were able to take a print on print feature. It was important to my clients the finished design be carried throughout the apartment, creating a modern industrial ‘hotel room’ experience in the bedrooms.

“Both of these rooms lean more to the industrial edgy aesthetic.” 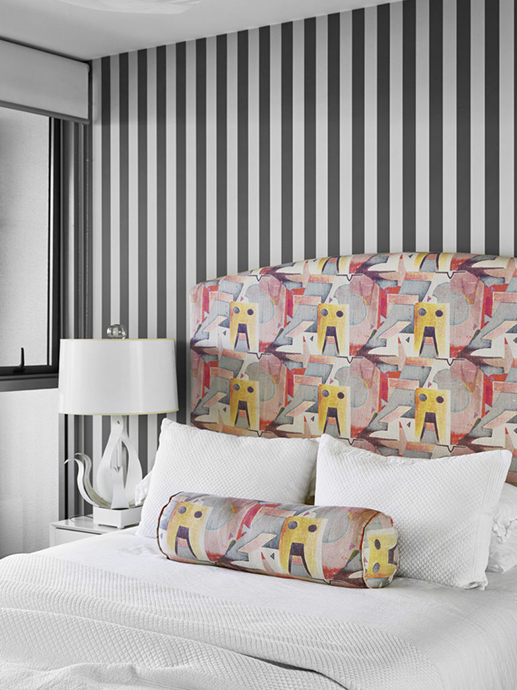 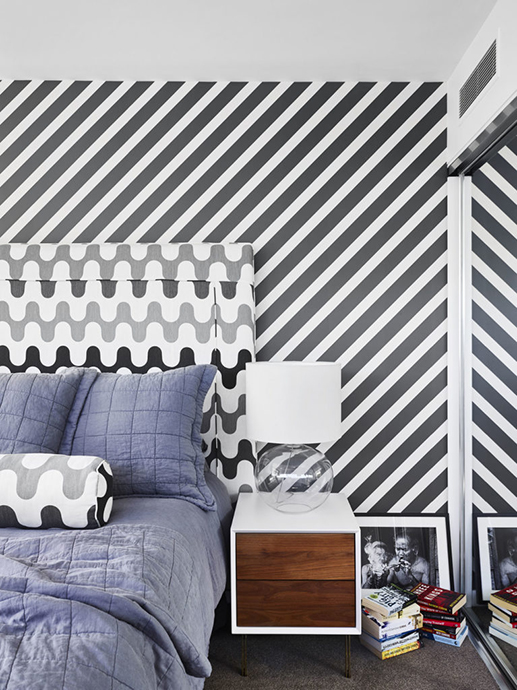 What were the main challenges of this project and how did you overcome them?

Creatively the most challenging part was bringing together a cohesive design whilst considering and implementing both design aesthetics.

Practically it was important to have a tile as the main floor finish, which meant overcoming regulations set by the Body corporate. This meant engaging with an acoustic engineer & installing acoustic underlay. Let’s say the final acoustic reading after the floor had been laid was a heart pounding hour.

How would you describe this project in one sentence?

Transitional space blending the edginess and essence of industrial/urban design with the warmth and softness of a traditional Hamptons modern feel. 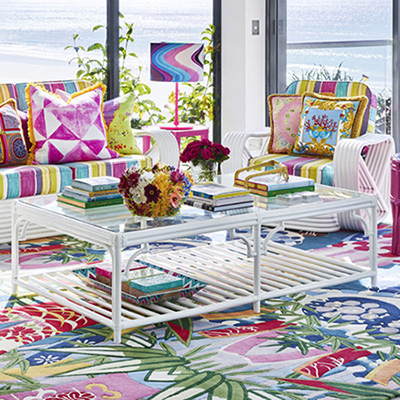 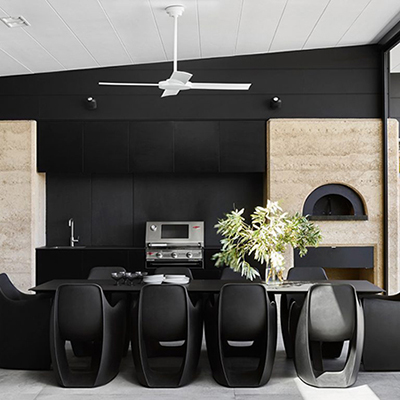 Get in touch and let's make some magic

The rich text element allows you to create and format headings, paragraphs, blockquotes, images, and video all in one place instead of having to add and format them individually. Just double-click and easily create content.

How to customize formatting for each rich text

Headings, paragraphs, blockquotes, figures, images, and figure captions can all be styled after a class is added to the rich text element using the "When inside of" nested selector system.